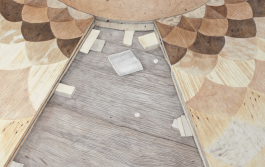 Peacock Island, 2009
Fingerprints on paper, wrapped in aluminum; placed under the original parquet floors of the Otaheite Cabinet in the castle on the Pfaueninsel (Peacock Island) near during restoration work in 2009. The parquet was last removed in 1870, so these fingerprints will probably remain there for the next hundred years.
The castle on the Pfaueninsel is a kind of pseudo-building whose one-dimensional architecture and construction are based entirely on illusion. The Otaheite Cabinet, a circular tea room, seems to oscillate peculiarly between antiquity and the South Pacific: it is lined with canvas and designed like a bamboo hut. In addition, the real windows have been filled with fictive views of an illusionistic exotic landscape in which the castellan’s house on the Pfaueninsel and the distant marble palace can be seen, surrounded by pineapples and parrots. The pattern of the wood floor is supposed to represent a cross section of a palm trunk. Otaheite is the former name of the South Pacific island of Tahiti.