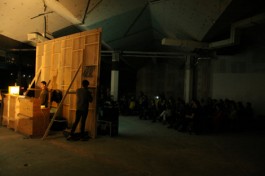 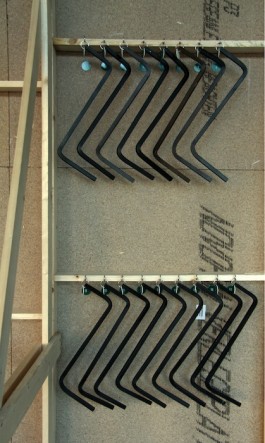 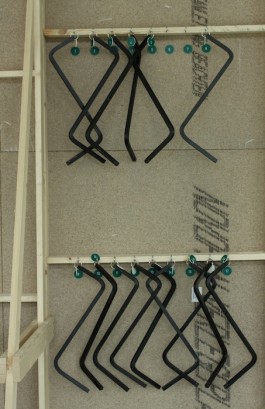 On the afternoon of the show I rode my bike from Neukölln to the base of the television tower in Alexanderplatz, Berlin. It was the opening of Lena Inken Schaefer’s exhibition “It all Belongs to You.” I locked my bike to a nearby post and walked up the wide concrete stairs into the old GDR exhibition space. As I entered a group of people were facing two A1-size posters stuck to the inside buildings glass façade. One of them was an information sheet detailing a nearby constructions site, the other: a site-map where a green-cross had been marked on the corner between Otto-Braun Strasse and Karl-Marx-Allee. Further down the poster were the following clandestine instructions:

Turning away from the posters, I found myself facing a collection of black cranks that looked like oversized Allen keys dangling from hooks on the backside of a free standing wall structure. Taking one of these handles, I walked outside to join the others. Dusk fell. We walked casually in the direction of construction site holding our metal tools like laborers disguised in pedestrian clothing. 368 meters above us the television tower loomed overhead like a panopticon and there was a feeling of mischief and excitement in the air.

When we arrived at the site I gleaned over the square patterned pavement as it passed underfoot. Eventually someone found the nut nestled in one of the concrete tiles and we gathered around to see what should happen next. I remember inserting the end of my handle into a respectively shaped space in the tile, and as I rotated it slowly, I listened to the faint high-pitched sound of coiling and tightening threads—presumably part of a hoisting mechanism that was hidden under the sidewalk. While turning, I checked over my shoulder and saw that a neighboring concrete tile had risen around 4 cm form the existing pavement. My eyes wondered from the stationary tile through the gaps in the wire fence half a meter away and into the construction site, where an unmanned bulldozer was stationed next to an upturned mound of earth and beyond that, at an eerie derelict GDR building stood waiting to be demolished. Darting my eyes back to the suspended tile, it was impossible not to see this exercise as making light of such transformations. I smiled to myself as I turned the crank anti-clockwise and watched as the tile descended back into the pavement.

Reflecting on this moment some years later, I’m still struck by that comparatively light gesture, which borrowed from the grammar of the surrounding space. The exercise made for an awkward dialogue—a frivolous attempt to grapple with the transition between ordered and broken geometry, and the different types of labour prescribed for demolition and its contemplation.

Lena’s quasi-archeological, bottom-up approach to understanding the present reveals a methodology that involves elevating constituent parts of larger and more complex systems. Ornamentation is an important part of this process, as a kind of thinking through gaps or pauses between actions. In Alexanderplatze, the moment of stasis or non-action, between winding up and down the plate for example, was extended to the dead-time of the construction site. The pause became an opportunity to extend the logic of the tile to consider the surrounding environment. I thought about the material duration of the footpath and the process of quiet maintenance that continues to take place 75 years after its construction. Walking around one gained a heightened awareness of the material condition of the footpath and its inconsistencies where materials like tar or marble had become stand-ins for the original concrete tile. Seen in its entirety, these unsuspecting additions appeared as artifacts that revealed an underlining narrative of economic and contingent forces at play.

From some years during that time, Lena worked as an illustrator to an archeological firm, making drawings of historical objects discovered on site. The relationship between ornamentation and archeology goes a long way in informing Lena’s approach to the site at Alexanderplatz. The precision and delicacy of her archeological drawings carry with them the weight and responsibility of recording a previously buried history. A similar weight of attention, despite its scale, was bought to the elevated tile in the footpath, which in turn transformed this ubiquitous everyday object by lending it the heightened value of an ornament. In the drawings this relationship between ornamentation and archeology is most visible, and it’s through this lens that we begin to see the present in relationship to its past, as a heterogeneous and slowly transforming ornament shaped by time.