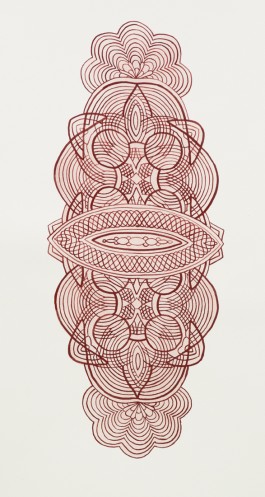 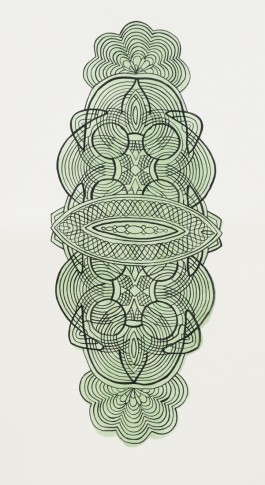 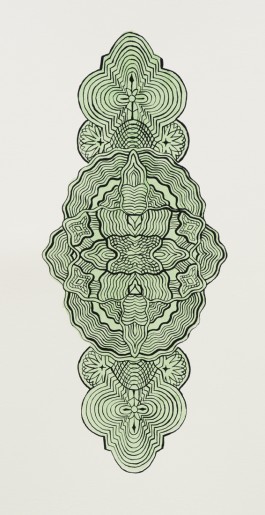 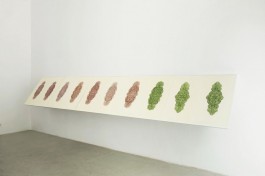 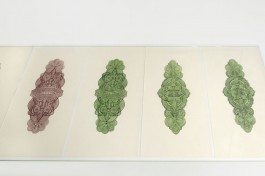 (...) In the work of Lena Inken Schaefer, the difference between signifying sign and ornament also stands out. Ten different handmade drawings are presented in a five-meter long series under Plexiglas. An astute eye will notice the almost imperceptible differences between the patterns of the two series. In one drawing, a pattern is repeated from the preceding drawing, while the color is adapted to subsequent drawings. A shift transpires that is only actualized with an awareness of the meaning of these decorative patterns. In the series presented a transformation takes place, a smooth transition, from pink to green. From 5000 to 50 000.

Lena Inken Schaefer has painted the patterns of banknotes. These patterns are the genetic code of the banknote and they also make it possible to figure out which particular bill they represent. However, Lena Inken Schaefer has not only removed these patterns from their context, but has also enlarged them multiple times. In so doing, they are ultimately stripped of any historical referencing or recognizability. What remains is only an aleatoric element devoid of meaning, which could be perceived as a decorative element. However, these patterns tell the story of the period of inflation in Germany in 1922, when German money lost so much value in such a short time that banknotes had to be produced non-stop.

Money- an element that normally enables exchange and simultaneously determines its rules- breaks down, just like its recognition-enabling signs, produced by the halves and combined together, appear as if they were the image of an ancient find in the manner of archaeological excavations.
(Selina Lai, 2013)