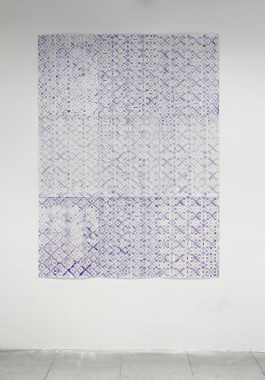 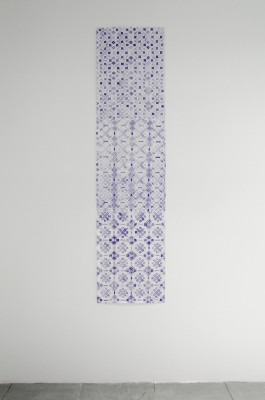 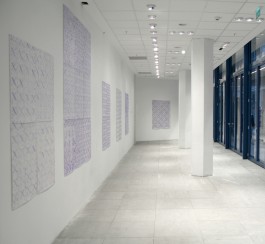 For the series 46 fragments from Belarusian 100 ruble bills, which was shown in 2011 at the 4D Project Space in Berlin, Lena Inken Schaefer took individual fragments of the pattern decorating the ruble bills of Belarus, radically enlarged and copied them, and hung them as a “pattern painting” on the walls. These patterns, introduced long ago for the specific reason of preventing forgery and making notes and individual denominations identifiable, are thus devalued (by being repurposed and turned into purely “decorative” patterns), only to then be invested with a different kind of value (through their transfer into the realm of art). In the process the (value producing) abstraction of money becomes a concrete pattern, which, in its decorative function, is nothing more than what it is: a pattern. A renewed (an now conceptual) value is introduced through the accompanying story of the pattern’s origin.